To quickly review the types:

Prior to WRITE SAME support, the performance differences between these virtual disk allocation mechanisms were distinct. This was due to the fact that before an unallocated block could be written to, zeroes would have to be written first causing an allocate-on-first-write penalty (increased latency). Therefore, for every new block written, there were actually two writes; the zeroes then the actual data. For thin and zeroedthick virtual disks, this zeroing was on-demand so the penalty was seen by applications. For eagerzeroedthick, it was noticed during deployment because the entire virtual disk had to be zeroed prior to use. This zeroing caused unnecessary I/O on the SAN fabric, subtracting available bandwidth from “real” I/O.

To resolve this issue, VMware introduced WRITE SAME support. WRITE SAME is a SCSI command that tells a target device (or array) to write a pattern (in this case, zeros) to a target location. ESXi utilizes this command to avoid having to actually send a payload of zeros but instead simply communicates to any array that it needs to write zeros to a certain location on a certain device. This not only reduces traffic on the SAN fabric, but also speeds up the overall process since the zeros do not have to traverse the data path.

This process is optimized even further on the Pure Storage FlashArray. Since the array does not store space-wasting patterns like contiguous zeros on the array, the zeros are discarded and any subsequent reads will result in the array returning zeros to the host. This additional array-side optimization further reduces the time and penalty caused by pre-zeroing of newly-allocated blocks.

With this knowledge, choosing a virtual disk is a factor of a few different variables that need to be evaluated. In general, Pure Storage makes the following recommendations:

With that being said, for more details on how these recommendations were decided upon, refer to the following considerations. Note that at the end of each consideration is a recommendation but that recommendation is valid only when only that specific consideration is important. When choosing a virtual disk type, take into account your virtual machine business requirements and utilize these requirements to motivate your design decisions. Based on those decisions, choose the virtual disk type that is best suitable for your virtual machine.

No virtual disk option quite fits all possible use-cases perfectly, so choosing an allocation method should generally be decided upon on a case-by-case basis. VMs that are intended for short term use, without extraordinarily high performance requirements, fit nicely with thin virtual disks. For VMs that have higher performance needs eagerzeroedthick is a good choice.

Pure Storage makes the following recommendations for configuring a virtual machine in vSphere:

Virtual SCSI Adapter—the best performing and most efficient virtual SCSI adapter is the VMware Paravirtual SCSI Adapter. This adapter has the best CPU efficiency at high workloads and provides the highest queue depths for a virtual machine—starting at an adapter queue depth of 256 and a virtual disk queue depth 64 (twice what the LSI Logic can provide by default). The queue limits of PVSCSI can be further tuned, please refer to the Guest-level Settings section for more information. The virtual NVMe adapter is supported by both Pure and VMware, but at this time there is no significant benefit to its use over PVSCSI. In the future, that will likely change, but as of ESX 7.0 U1 the recommendation (not requirement though) remains PVSCSI.

Virtual Hardware—it is recommended to use the latest virtual hardware version that the hosting ESXi hosts supports.

VMware tools—in general, it is advisable to install the latest supported version of VMware tools in all virtual machines.

CPU and Memory - provision vCPUs and memory as per the application requirements.

VM encryption—vSphere 6.5 introduced virtual machine encryption which encrypts the VM’s virtual disk from a VMFS perspective. Pure Storage generally recommends not using this and instead relying on FlashArray-level Data-At-Rest-Encryption. Though, if it is necessary to leverage VM Encryption, doing so is fully supported by Pure Storage—but it should be noted that data reduction will disappear for that virtual machine as host level encryption renders post-encryption deduplication and compression impossible. 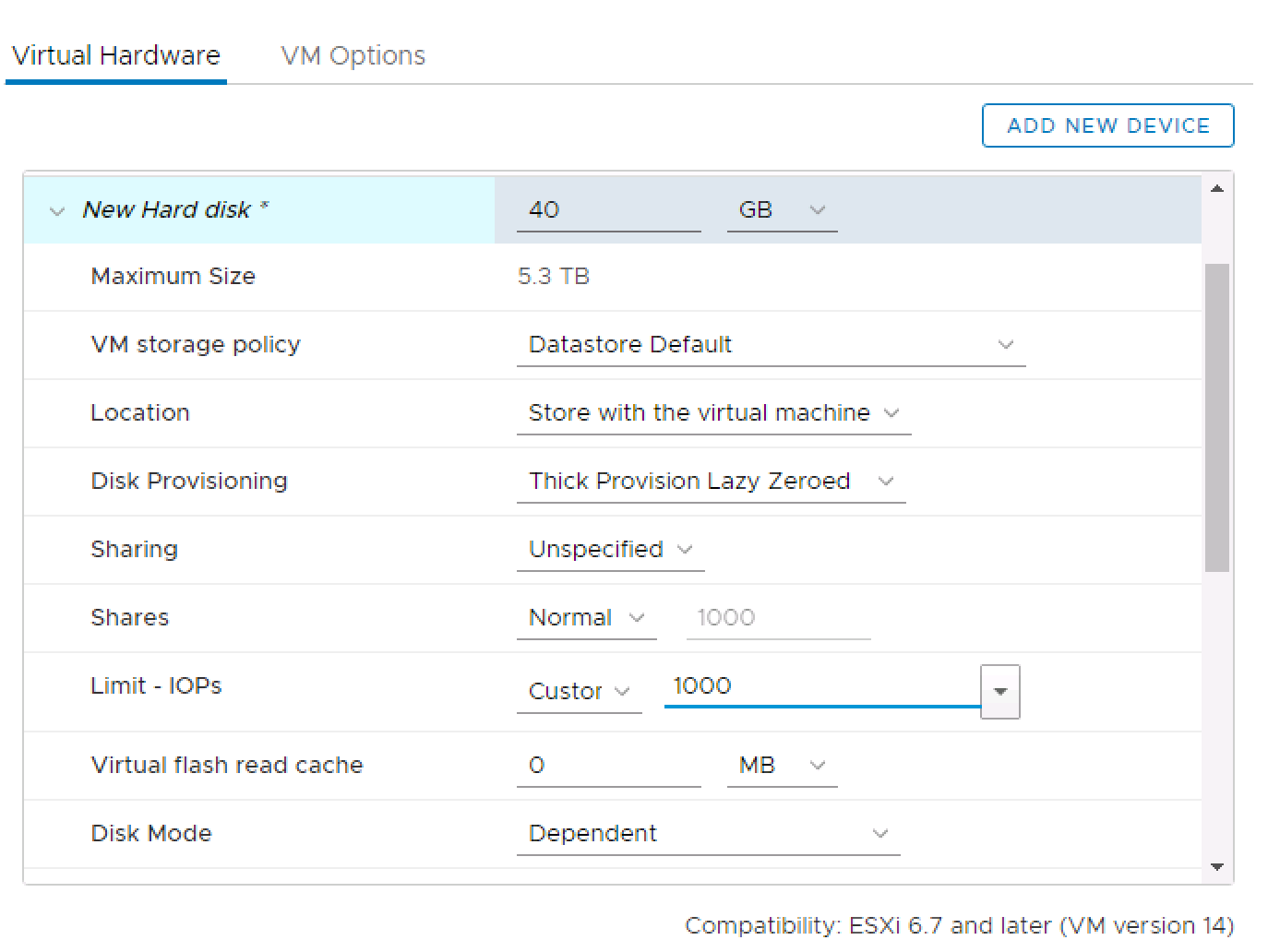 In ESXi 6.5 and later, this can also be configured via a VM Storage Policy: BEST PRACTICE: Use the Paravirtual SCSI adapter for virtual machines for best performance.

In general, template configuration is no different than virtual machine configuration. Standard recommendations apply. That being said, since templates are by definition frequently copied, Pure Storage recommends putting copies of the templates on FlashArrays that are frequent targets of virtual machines deployed from a template. If the template and target datastore are on the same FlashArray, the copy process can take advantage of VAAI XCOPY, which greatly accelerates the copy process while reducing the workload impact of the copy operation.

BEST PRACTICE: For the fastest and most efficient virtual machine deployments, place templates on the same FlashArray as the target datastore.

Prior to Full Copy (XCOPY) API support, when virtual machines needed to be copied or moved from one location to another, such as with Storage vMotion or a virtual machine cloning operation, ESXi would issue many SCSI read/write commands between the source and target storage location (the same or different device). This resulted in a very intense and often lengthy additional workload to this set of devices. This SCSI I/O consequently stole available bandwidth from more “important” I/O such as the I/O issued from virtualized applications. Therefore, copy or move operations often had to be scheduled to occur only during non-peak hours in order to limit interference with normal production storage performance.  This restriction effectively decreased the ability of administrators to use the virtualized infrastructure in the dynamic and flexible nature that was intended.

The introduction of XCOPY support for virtual machine movement allows for this workload to be offloaded from the virtualization stack to almost entirely onto the storage array. The ESXi kernel is no longer directly in the data copy path and the storage array instead does all the work. XCOPY functions by having the ESXi host identify a region of a VMFS that needs to be copied. ESXi describes this space into a series of XCOPY SCSI commands and sends them to the array. The array then translates these block descriptors and copies/moves the data from the described source locations to the described target locations. This architecture therefore does not require the moved data to be sent back and forth between the host and array—the SAN fabric does not play a role in traversing the data. This vastly reduces the time to move data. XCOPY benefits are leveraged during the following operations[1]:

During these offloaded operations, the throughput required on the data path is greatly reduced as well as the ESXi hardware resources (HBAs, CPUs etc.) initiating the request. This frees up resources for more important virtual machine operations by letting the ESXi resources do what they do best: run virtual machines, and lets the storage do what it does best: manage the storage.

On the Pure Storage FlashArray, XCOPY sessions are exceptionally quick and efficient. Due to FlashReduce technology (features like deduplication, pattern removal and compression) similar data is never stored on the FlashArray more than once. Therefore, during a host-initiated copy operation such as with XCOPY, the FlashArray does not need to copy the data—this would be wasteful. Instead, Purity simply accepts and acknowledges the XCOPY requests and creates new (or in the case of Storage vMotion, redirects existing) metadata pointers. By not actually having to copy/move data, the offload duration is greatly reduced. In effect, the XCOPY process is a 100% inline deduplicated operation. A non-VAAI copy process for a virtual machine containing 50 GB of data can take on the order of multiple minutes or more depending on the workload on the SAN. When XCOPY is enabled this time drops to a matter of a few seconds.

XCOPY on the Pure Storage FlashArray works directly out of the box without any configuration required. Nevertheless, there is one simple configuration change on the ESXi hosts that will increase the speed of XCOPY operations. ESXi offers an advanced setting called the MaxHWTransferSize that controls the maximum amount of data space that a single XCOPY SCSI command can describe. The default value for this setting is 4 MB. This means that any given XCOPY SCSI command sent from that ESXi host cannot exceed 4 MB of described data. Pure Storage recommends leaving this at the default value, but does support increasing the value if another vendor requires it to be. There is no XCOPY performance impact of increasing this value. Decreasing the value from 4 MB can slow down XCOPY sessions somewhat and should not be done without guidance from VMware or Pure Storage support. For this reason, Pure Storage recommends setting the transfer size to the maximum value of 16 MB.

In general, standard operating system configuration best practices apply and Pure Storage does not make any overriding recommendations. So, please refer to VMware and/or OS vendor documentation for particulars of configuring a guest operating system for best operation in VMware virtualized environment.

That being said, Pure Storage does recommend two non-default options for file system configuration in a guest on a virtual disk residing on a FlashArray volume. Both configurations provide automatic space reclamation support. While it is highly recommended to follow these recommendations, it is not absolutely required.

Refer to the in-guest space reclamation section for a detailed description of enabling these options.

As mentioned earlier, the Paravirtual SCSI adapter should be leveraged for the best default performance. For virtual machines that host applications that need to push a large amount of IOPS (50,000+) to a single virtual disk, some non-default configurations are required. The PVSCSI adapter allows the default adapter queue depth limit and the per-device queue depth limit to be increased from the default of 256 and 64 (respectively) to 1024 and 256.

If an application does need to push a high amount of IOPS to a single virtual disk these limits must be increased. See VMware KB here for information on how to configure Paravirtual SCSI adapter queue limits. The process slightly differs between Linux and Windows.