The Table of Contents for this guide can be found here and is helpful for navigating to the rest of this guide.

A common failure is some type of host failure that renders ESXi unable to keep running virtual machines. This could be a power failure, a host kernel crash or something else.

vSphere HA will take over and restart virtual machines on other hosts when a host failure has been detected.

In this environment, there is a VM named VM02 running on host ac-esxi-a-01:

A host failure occurs and is marked as lost:

At this point, vSphere HA kicks in and restarts the VM on another host. Since this environment as a rule that this VM should only be on hosts in host group A, it is restarted on an “A” host. Since ActiveCluster presents the same VMFS datastore to both datacenters from a FlashArray in each datacenter, the hosts in the remote datacenter can reboot the VMs from the failed hosts in a different datacenter with ease.

The behavior of host failure is not impacted by whether or not the cluster is configured for Uniform or Non-Uniform connectivity.

In more severe failures, entire loss of the underlying storage system or SAN can occur, leading to ESXi hosts continuing to run, but with no storage access. This is a different type of failure than a host failure—as the host is still online but it cannot continue to run its VMs as there are no available paths to the local FlashArray.

Depending on the failure and on the configuration of the stretched cluster (uniform or non-uniform), vSphere reacts differently and the failover mechanism changes.

As discussed previously in this guide, a non-uniform stretched cluster is a cluster of ESXi hosts which are split across to physical sites, usually half in one datacenter and half in another datacenter. Each datacenter has a FlashArray and those two FlashArrays have ActiveCluster enabled on one or more volumes allowing the storage volume(s) to be presented simultaneously at both sites. The non-uniform portion of this configuration defines what paths to the storage the hosts see. In a non-uniform configuration, hosts only have paths to the volume (or volumes) via the FlashArray that is local to their datacenter.

In this scenario, essentially any storage-related failure will cause a vSphere HA failover such as:

These failures all lead to the same result in the presence of non-uniform configurations: loss of storage connectivity of the host and a vSphere HA failover. The datastore is hosted on a FlashArray volume that has been stretched to both FlashArrays using ActiveCluster.

In this cluster, half of the 8 virtual machines are running on “B” hosts and half are running on “A” hosts, so a storage failure on either side will cause 4 VMs to be restarted on the remaining hosts on the other side.

For this example, FlashArray “B” will experience a failure:

This causes the VMFS datastore to go inaccessible on the “B” hosts.

But because it is presented through both FlashArrays via ActiveCluster, the “A” hosts continue to have access to the datastore:

Once the timeouts have been reached (dependent on the APD/PDL timeout configuration) if APD/PDL responses have been enabled, ESXi will shut down the VMs on the hosts that lost storage access and restart them on hosts with surviving storage connections to the volume. The VMs will be shut down, which makes them briefly marked as inaccessible. The VMs will then come back online and be powered-on elsewhere. When the FlashArray comes back online, the storage can then be seen again by the “A” hosts. If there are host-affinity rules, the VMs will be moved back almost immediately by vSphere DRS. Otherwise, they will remain where they are until manually moved, another failure occurs, or resource usage demands vSphere DRS rebalance the VMs across the cluster.

A uniform stretched cluster means that all hosts in the cluster have paths to a stretched volume through both FlashArrays servicing that volume via ActiveCluster. This configuration provides an additional level of resilience for virtual machines, as VMs can continue to run non-disruptively through the failure of an entire FlashArray, or the connectivity to it.

In the case of all hosts in one site losing all storage access where those hosts cannot access their local FlashArray, nor their remote one, the failover process is identical to the process shown in the previous section on non-uniform failover. In that case, vSphere HA will restart the affected virtual machines on the hosts in the remote site.

For uniform configurations, the case where just a single array fails is different. In this case, VMs can continue to run on their host, as those hosts can still access the storage, but via paths to the remote FlashArray. Therefore, this is not a case of a vSphere HA restart,which has downtime until the VM can be rebooted, but it is a case of multipathing simply failing over to the paths to the remote FlashArray. A multipathing failover is entirely non-disruptive, as a VM reboot is not required.

The below environment is configured in a uniform fashion, so all eight hosts have access to the VMFS protected via ActiveCluster through both FlashArrays: Furthermore, the preferred FlashArray is set on the host object, so that only the paths for a given host to its local FlashArray are in-use (denoted by the (I/O)).

After a failure of a FlashArray, the datastores from that array that are not protected by ActiveCluster go offline:

The paths to that volume to the failed FlashArray are gone, but the paths to the remote site remain available and become active. 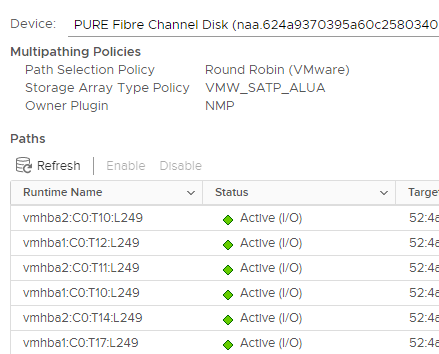 Note: If the Mediator becomes unavailable after an array failure or a replication link failure has already been sustained, access to the mediator is no longer required and access to storage remains available on one array.

The next two sections will describe how ESXi hosts in a stretched cluster configuration respond to certain failures including:

This guide covered the combination of active-active replication on the FlashArray, called ActiveCluster, and vSphere High Availability, collectively referred to a solution called vSphere Metro Storage Cluster (vMSC). The simplicity and flexibility of the FlashArray itself and the ActiveCluster feature allows administrators to configure and offer a highly-available storage solution with ease.