VSS (Volume Shadow Copy Service) is a Microsoft Technology that allows taking manual or automatic backup copies or snapshots of computer files or volumes, even when they are in use. It is implemented as a Windows service called the Volume Shadow Copy service.

VSS operates at the block level of the file system.

Snapshots have two primary purposes: they allow the creation of consistent backups of a volume, ensuring that the contents cannot change while the backup is being made; and they avoid problems with file locking. By creating a read-only copy of the volume, backup programs are able to access every file without interfering with other programs writing to those same files.

What is a VSS Provider?

The data copy process can be handled by the file system or by specialized hardware; in the latter case a hardware VSS provider abstracts the functionality to the operating system. Applications can provide specific support for VSS through VSS writers which control how data is set to a consistent state at the beginning of a VSS operation and maintain that consistency throughout the process, among other functions.

Through the integration between the Volume Shadow Copy Service, hardware or software VSS providers, application level writers and backup applications, VSS enables integral backups that are point in time and application level consistent without the backup tool having knowledge about the internals of each application. For example, in a virtualization product such as Virtual Server 2005 R2 SP1 or Hyper-V in Windows Server 2008, a whole backup of an environment including several virtual machines can be created in a single operation, and the backups produced for the different VSS compatible guests in the system are transactionally consistent at the guest application level and point in time consistent among the different VMs, without the need for the guests to have backup agents installed. Windows software and services that support VSS include Windows Backup, Hyper-V, Virtual Server, Active Directory, SQL Server, Exchange Server, and SharePoint.

More details on our VSS provider can be found internally here.

What is the current released version of Pure Storage VSS Provider?

Which version of RestAPI is supported by the current released version of Pure Storage VSS Provider?

How to Verify that You Have Pure Storage VSS Provider Installed

Verify that you have Pure Storage system administrator rights to install the VSS hardware provider on the Windows host machine.

To verify that our VSS provider is up and running, so it can create snapshots, run Services MMC (services.msc from console window) and look for Pure VSS Provider service. When you click on it, you can verify if the service is currently started or stopped. Here is an example sceenshot of our VSS provider in stopped state: 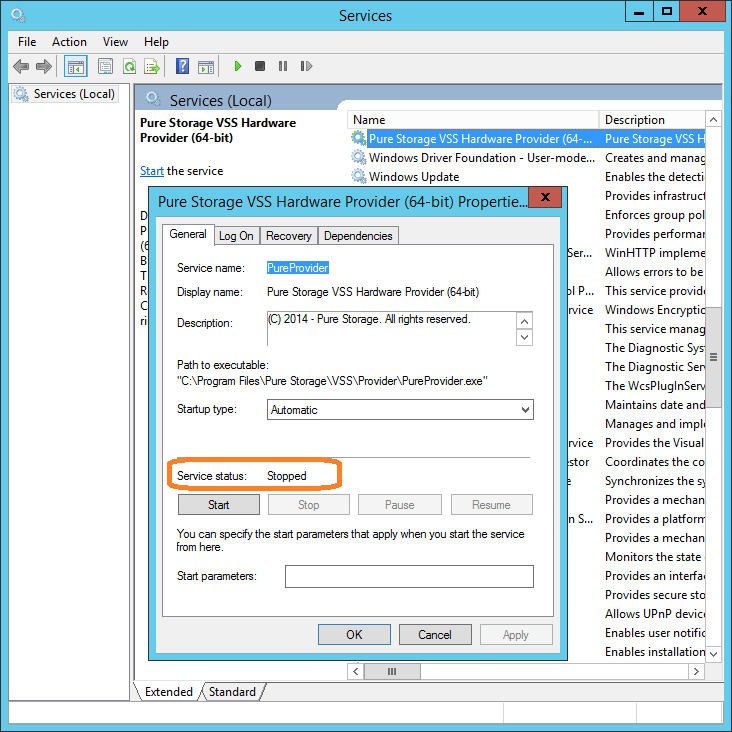 VSS Installer can be run silently without showing any UI or prompting the user. You must run the installer as admin to avoid a case where window UAC my prompt the user, which can block script execution.

To run installer in silent mode, simply add /s to the installer command-line:

Similarly, we can perform silent uninstall:

This will use the default install location, which is %ProgramFiles%\Pure\VSS\Provider

Here is a sample of the details that appear in the warning event:

Volume Shadow Copy Warning: The provider has reported a storage identifier that is not supported by VSS. Codeset:1, Type:4, Size:4, NextOffset:24, Association:1

This identifier will be skipped by VSS.

The warning events, which only occur on Windows Server 2008, are not related to the Pure Storage VSS Hardware Provider and can be ignored. Refer to the following Microsoft KB support article for more information: http://support.microsoft.com/kb/951793

4.1.1 and 4.1.2 of Purity have introduced REST API change that requires userAgent as part of the REST call, which prevents VSS 1.0.0 from connecting and/or authenticating with these versions. As a result, you cannot use VSS 1.0.0 with either of these two versions. You will need to download and use VSS 1.0.1 instead.

Before collecting the log files, make sure to turn the verbosity level high (recommended level 4 for troubleshooting).

Run the following command from the console window:

For the VSS Provider to function properly and start creating snapshots, it requires at least one FlashArray to be registered with it. To list all registered FlashArrays, run the following command:

To register one or more FlashArrays, please consult the user guide for more details.

use the DISKSHADOW Windows tool (command-line tool) and run the following script:

NOTES: Assuming T: is a volume mapped to your Windows initiator and is a PURE volume.

Please contact one of the developers on the 3rdman team. Or simply email us at pluginsupport@purestorage.com