This document demonstrates how to leverage Azure Site Recovery service (ASR) for migrating a VMware virtual machine (VM) to Azure cloud. The solution presented in this document is designed to provide a simple understanding of conducting a data migration to Azure from an on-premises VMware environment with Pure Storage.

Note that the failback process documentation is in progress.

The solution leverages two workflows. First, ASR for the replication and converting of the whole VM to Azure including the VM’s boot volume. Second, Pure Storage array-based replication for replicating the data volumes. Data volume replication requires the VMs volume to be in a vVol or RDM datastore and it can be performed from an on-premises FlashArray to Pure Cloud Block Store (CBS) on Azure, the replicated data volume can be presented to the newly created Azure VM via in-guest iSCSi.

This document can fit into many use case scenarios, including disaster recovery (DR), lift-and-shift migration, and Dev/Test.

Pure Cloud Block Store on Azure along with Azure Site Recovery provides a simple and cost-effective replication approach for Pure Customers with an on-premises FlashArray and VMware environment. This approach offers a unique hybrid-cloud environment for the data to be mobile and live anywhere.

The simplicity and the cost-effectiveness of this solution comes from combining both CBS array-based replication which reduces the total bandwidth preserving dedupe and compression on the wire, and ASR advanced near-constant block data replication and failover and failback functionality

For this solution, both Azure ASR and Pure CBS will be configured to continuously replicate the on-premises VMs to Azure. This offers the ability to failover to a newly provisioned Azure VM instance on-demand and failback accordingly. Azure ASR first replicates the boot disk/volume to reside on Azure storage account. Once the initial sync is complete, ASR handles the instantiation of the instance (Azure VM) and attaches the boot volume to it. Within the same process, ASR works on excluding the data volumes prior to the replication being initiated. Those data volumes are replicated using the built-in Pure replication between FlashArray and CBS, and can be mounted using in-guest iSCSi to the created instance. Create an Azure VNet and Subnet

(If a VNet and subnet are already existed and have enough IP addresses for the replicated VM, move to the next Section )

Note: NAT Gateway and Service Endpoint are not used in this setup. If a customer wants to leverage NAT Gateway to provide internet connectivity, see Create and validate NAT Gateway. There are limitations in uploading large OVA files (The Configuration server template OVA size is 21 GB). Based on VMware KB, VMware recommends extracting the OVA file. Then you can provide the deployment wizard with the OVF and VMDKs as separate files. 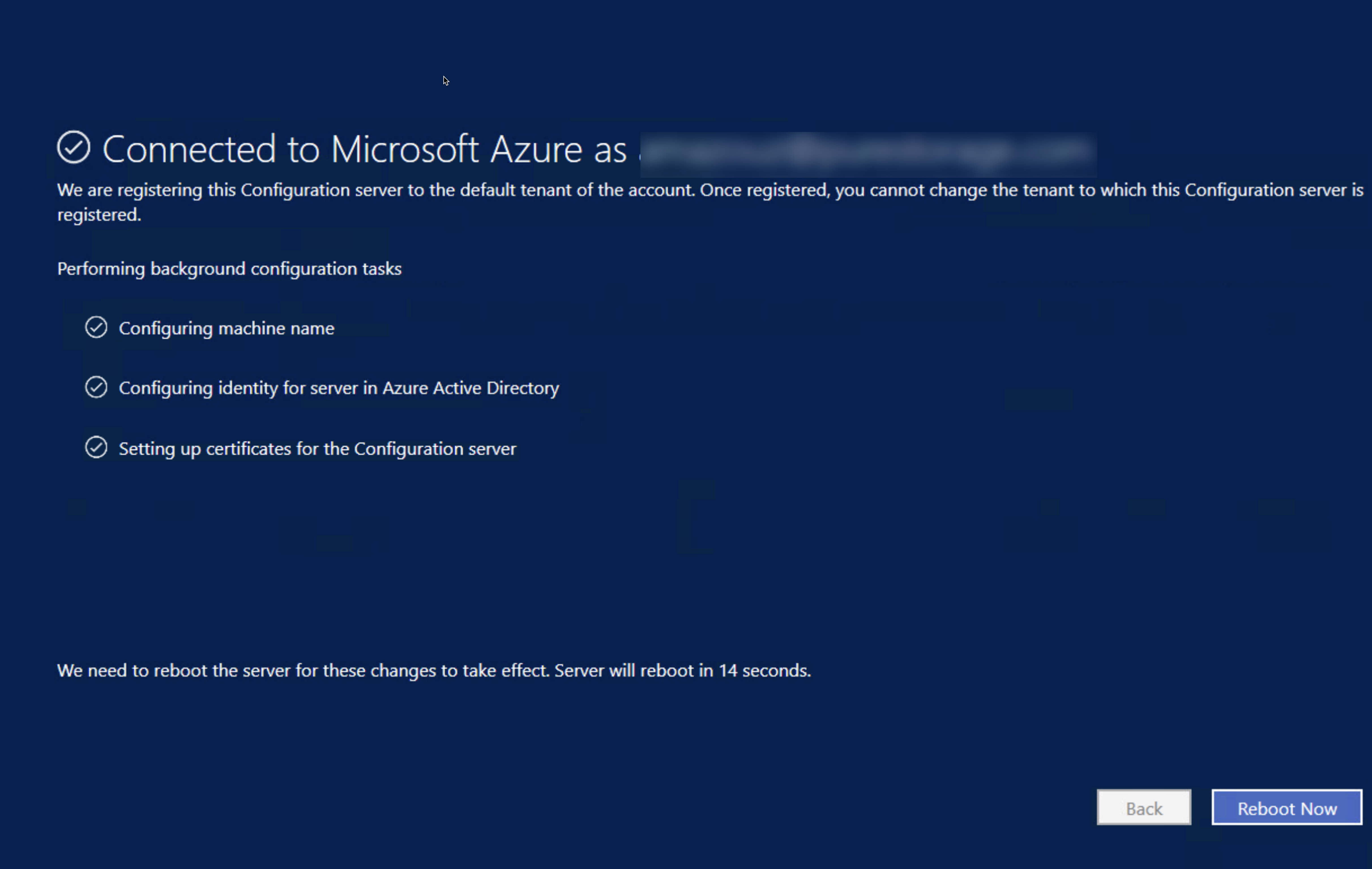 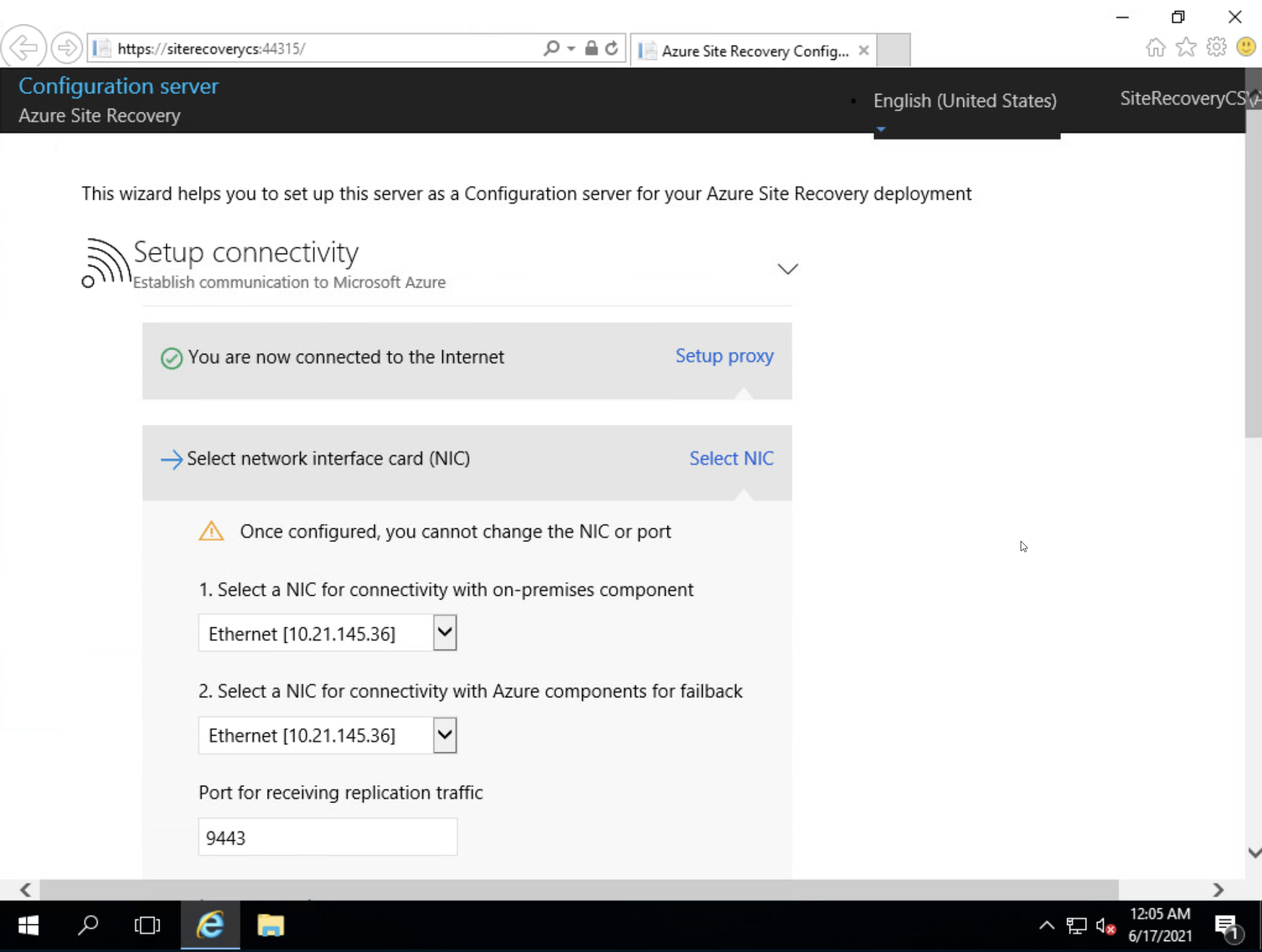 Note: Network settings and Recovery Service vault selection can not be changed once this wizard is completed and the configuration server is registered. 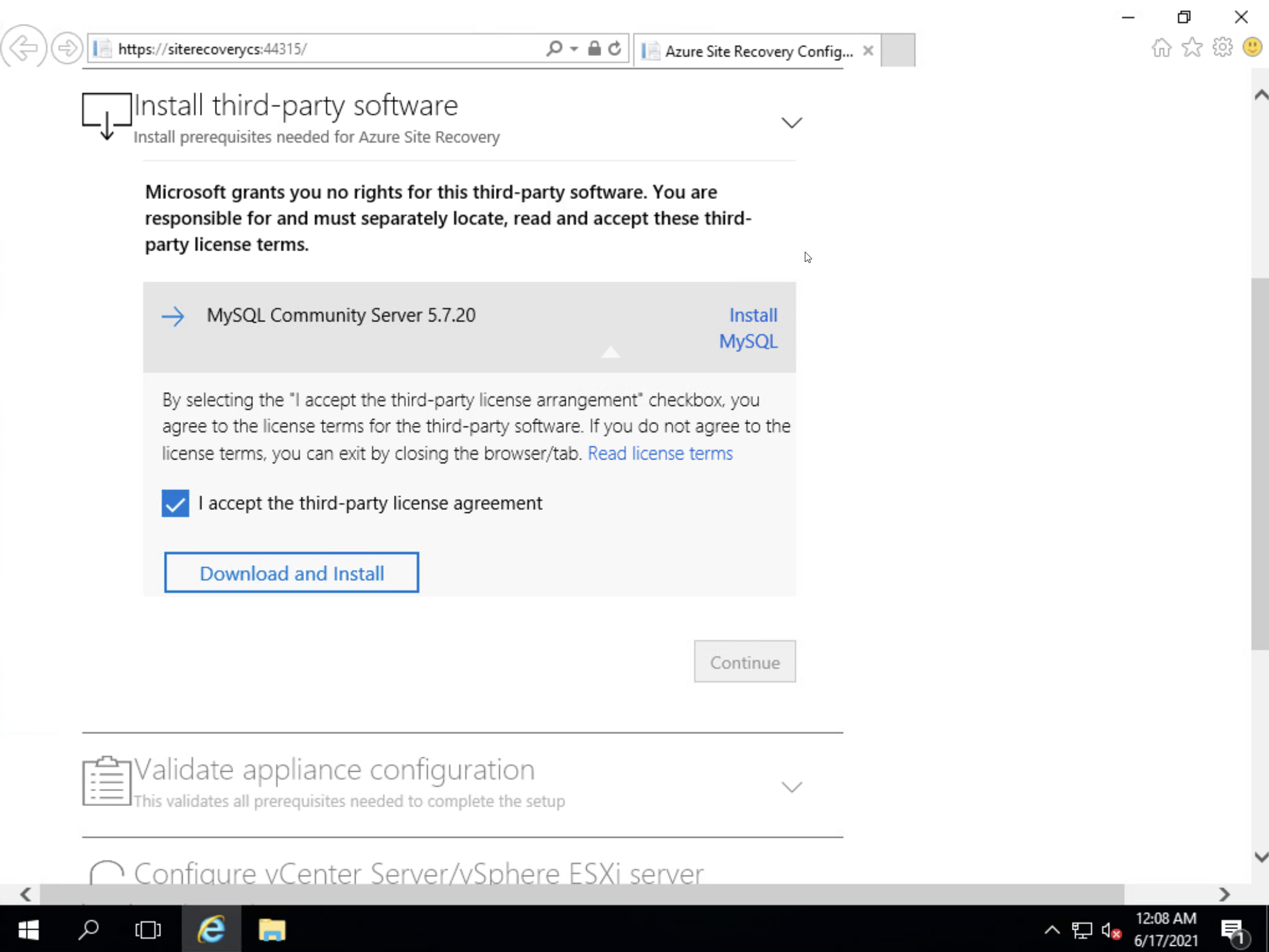 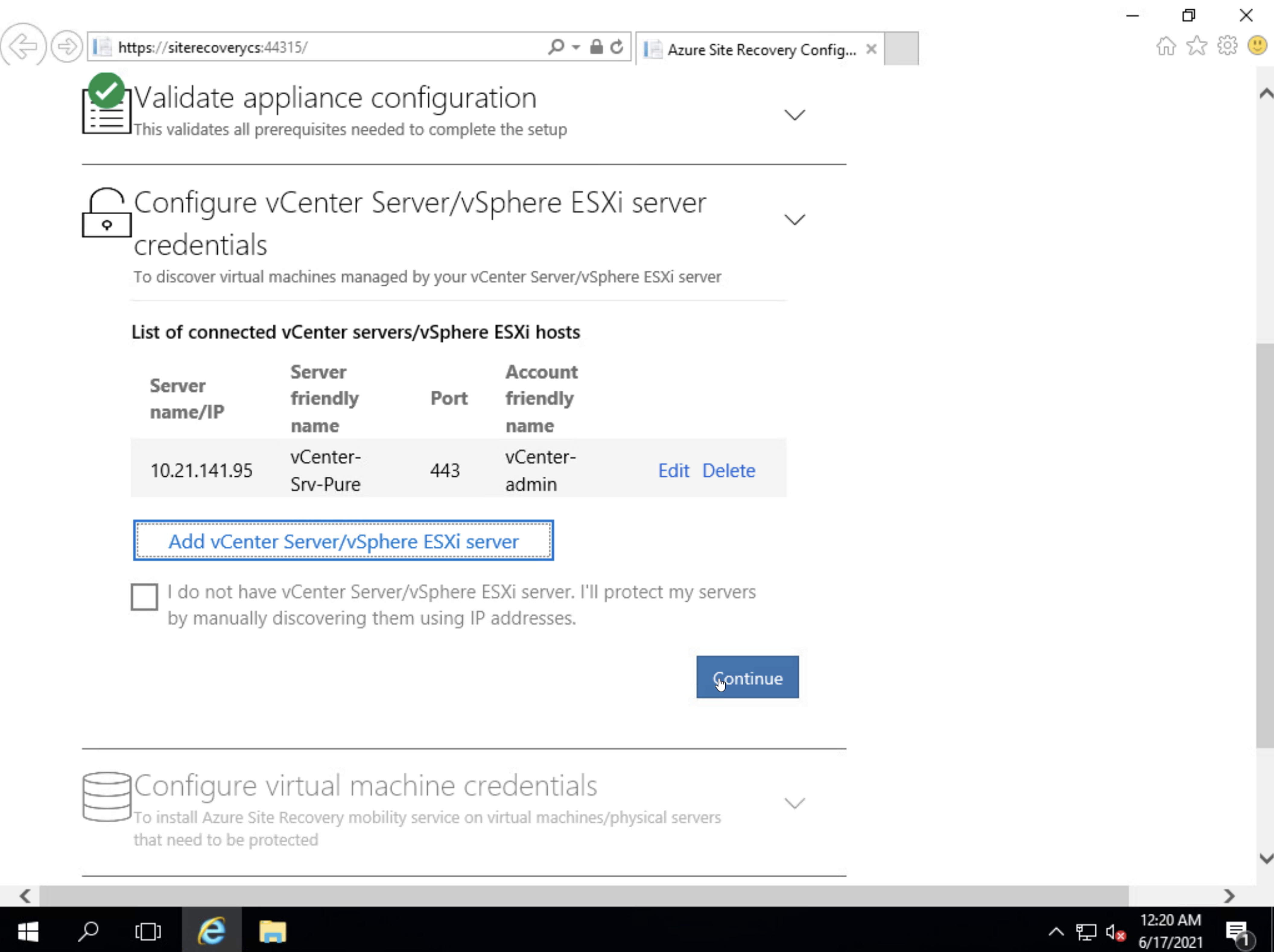 For each VM planned to be replicated, perform the below:

1. Click on the created Azure Recovery Vault and click Prepare Infrastructure. If the previous steps are done successfully, the Source settings should be filled in automatically.

2. In Target Settings, select the Azure subscription and the deployment model for the post-failover environment.

1. Go back to the create vault and select Enable replication from Site Recovery tab. 3. In Target environment, select the subscription and resource group and network (VNet and subnet) in which the replicated data will failover to.

4. Select the Virtual machine(s) from the discovered list. If VM(s) can not be selected (grayed out), the reason would appear when you hover on the exclamation mark. The most common reasons are: 1. VMware tools are not installed, 2. Vm is not powered up, 3. No IP address associated to the VM.

If VM(s) are not available in the list, see the troubleshooting steps in Troubleshoot source machines that aren't available for replication.

5. In Replication settings, there are four sections to be filled:

a. User account credentials. This can be added from the configuration server and it is sued to push the installation of the mobility service agent. However, in our scenario, the mobility service has been manually installed in order to particularly include the Boot volume and exclude the rest.

d. Target name. This is the VM name after failover.

1.  Once the initial replica is completed. The replication Item is cleared to be tested or failed over. it is recommended to test the replication before cutting it over and complete the migration. 2. The Azure VM size can be changed from Compute and Network tab, and then click Edit.

3. In case of failover action to be performed. a list of recent recovery points (crush consistent and application-consistent) to choose from. Also, there is an option to shutdown the source machine.

Note: the frequency of the recovery points can be always configured/changed by associating a new replication policy or modifying an existed one.

4. To verify the failover, navigate to Virtual Machine and select the VM name, scroll down and select Boot diagnostics tab, click refresh to get a live screenshot from the OS.

5. If the failover is successful and VM is healthy. Commit can be initiated to persist the failover and stop the protection/replication. Alternatively, a Complete Migration can be done. However, the VM can not be failed back to the VMware environment at that point. See Creating Hosts in the deployment and configuration guide for detailed examples on how to create and attach a volume to a host.

2. Install iSCSI and Multipath required packages on the host and perform iSCSi login and MPIO configuration.

4. Mount volumes and bring up the application.

For detailed steps on how to configure and connect Azure VM to CBS volumes, please refer to this section (Mounting a volume) in the deployment and configuration guide.

Convert Data from a VMFS Datastore to a VVol Datastore

Before data can be migrated from a VMFS Datastore to a vVol Datastore, it is recommended that the FlashArray plugin be installed in vCenter, in order to simplify vVol administration.

The following document goes through the steps to install the FlashArray plugin in vCenter, and to register the FlashArray VASA provider with vCenter:

When the steps in the document at the above link are followed to install the FlashArray plugin in vCenter, and to register the VASA provider with vCenter, a Protocol Endpoint called pure-protocol-endpoint is automatically created on the FlashArray.

After the steps above have been completed, a vVol Datastore should be created.

The next step is to create a vVol Datastore. This can be done using the following steps. Right-click on the host or the host cluster, and select New Datastore under Storage: Select the VVol option for the datastore type: Specify a name for the new vVol Datastore; select the vVol container for the FlashArray; and click Next: In this example, we are creating a vVol Datastore called Vvol-TMEFA07-DS: Select the host or host cluster that will have access to the vVol Datastore: Review the summary, and click Finish to create the datastore: View the list of datastores for the ESXi host to verify that the newly created vVol Datastore called Vvol-TMEFA07-DS has been created:

Migrating the VM to the VVol Datastore Select the Change Storage option. The option to change both compute and storage can also be used, if desired: Select the vVol Datastore called Vvol-TMEFA07-DS as the storage destination, and click Next: Review the summary and click Finish to migrate the storage for the SQLSrv-2019 VM to the Vvol-TMEFA07-DS Datastore: When the migration is complete, verify that the datastore for the VM SQLSrv-2019 is now the vVol Datastore Vvol-TMEFA07-DS as shown below:

After the datastore for the VM SQLSrv-2019 has been migrated from VMFS to the vVol Datastore, the VM can be replicated to a CBS instance in AWS.